Of course Islam is a religion of peace, but it all depends on what their definition of peace is?

We should have learned long ago, during the cold war, that words can sometimes be misused, or have different meanings, depending on who uses them.

To begin, lets examine what Abraham Lincoln said in 1864.

Here are two, not only different, but incompatible things, called by the same name--liberty.  And it follows that each of the things is, by the respective parties, called by two different and incompatible names -- liberty and tyranny."

Here's a article from the Stars & Stripe's newspaper I received while station in England during the cold war. 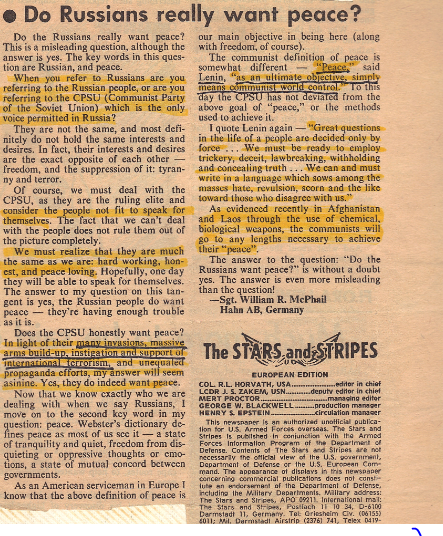 The question that begs us today,
is do Muslims really want peace?


Email ThisBlogThis!Share to TwitterShare to FacebookShare to Pinterest
Labels: On my mind

By all means please speak your mind, especially if you disagree with something, but do so with respect and civility to others.

Moderation in the pursuit of freedom is no virtue, it's the slow road to slavery.

Best of Think Links ... are you ready?

Don't tread on us